Farm4Trade has developed the first animal recognition system, completely contactless, for individual cattle identification based on the use of AI and Computer vision technologies. 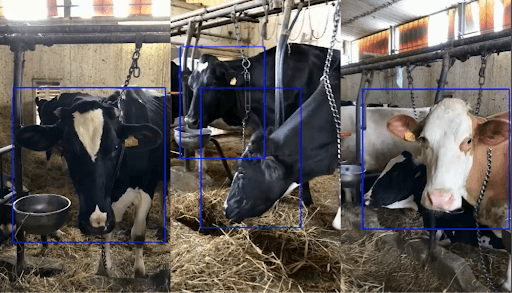 WHY ACCURATE ANIMAL BIOMETRIC IDENTIFICATION AND TRACEABILITY IS CRUCIAL FOR HEALTH, SAFETY AND EFFICIENCY.

Livestock identification is a complex activity, strictly linked to the protectionof public health, as well as to the safeguard of livestock cattle. Identification and traceability plays a key role in every step of production of commercial animal products, from meat to milk. Animal health has a direct impact on public health, not only because some animal diseases are transmissible to humans, but also because they cause food safety concerns. Furthermore, animal epidemics can cause significant economic costs, the loss on both domestic and export markets, and the direct cost for disease control and prevention. Hence the growing need to support traditional identification and traceability systems, such as ear tags and boluses, with new tools based on modern technologies. The use of more modern technology can significantly reduce the risk of spreading diseases, including the risk of contamination in animal derived food products, which can be a threats to human health.

ANIMAL IDENTIFICATION AND TRACEABILITY: FROM YESTERDAY TO TODAY

The traditional livestock marking systems (boluses and ear tags) are still the most common methods for the animal identification. Unfortunately, theses systems were motivated by health reason but instead, to know who their owners are. However, with the progressive intensification of animal production, they have been adopted to meet a multitude of new needs. Today, identification and traceability systemswhich become efficient and safe for both animals and products derived therefrom are important management tools for health and food safety, so much so that in many countries such as the EU and the US are considered a legal requirement. The pillars of a true animal traceability system are based on the identification of individual animals and / or homogeneous groups of animals, the ability to keep track of their movements, their health and production history and the recording of this information in appropriate registers.*

The need to identify and recognize a head of cattle is not only a need for authorities, but a daily necessity for all operators along the entire supply chain, from breeders to transporters, from slaughterhouse staff to those working in markets and stalls. In the perspective of giving a real contribution to this sector, Farm4Trade, in collaboration with the Experimental Zooprophylactic Institute of Abruzzo and Molise and the AiMagelab, research laboratory of the Department of Engineering Enzo Ferrari of the (UNIMORE) University of Modena and Reggio Emilia, have developed the first animal recognition system, completely contactless, capable of using images of cattle faces, by exploiting AI and Computer vision based technologies through the use of convolutive neural networks (CNN). To develop this biometric recognition system for individual cattle identification, we’ve created a mobile application to acquire images and video streams of “cattle faces", and then archive the collection media. The use of a smartphone application for data collection has enabled us to reproduce, as faithfully as possible, real farm conditions, and therefore verify the system’s ability to identify and recognize the animal in any environmental condition. The developed recognition system combines an image of the front profile with at least one side image of the same animal. This is due to the fact that the left and right profiles do not share any symmetry - unlike human beings.The neural networks have been trained using over 13,000 images acquired from 700 different cattle.

The studies carried out until now have made possible to achieve a high percentage of recognition accuracy. The reliability of results of the official experiments have reached an average of 85%, and in some cases accuracy exceeds 90%.

Having reached such a high percentage of accuracy in a short time proves the validity of the method, a safe and effective system capable of strengthening traditional identification systems, as well as a valid tool for animal recognition during daily operations in the company, animal transport or related loading and unloading operations. Ear tags and boluses (electronic and non-electronic) may in fact be lost or reveal malfunctions and errors. It is also very difficult to avoid and control fraudulent actions, such as removal and voluntary replacement of this identification systems. Biometric recognition systems are extremely hard to tamper, and have therefore been internationally adopted to verify the accurate identity of people. For example, the increasing worldwide adoption of electronic passports with integrated biometric data identification. The patented system as “Method and System for the univocal biometric identification of on animal, based on the use of deep learning techniques” represents a disruptive technology capable of redesigning the current scene in both public and private sectors.

In the health and livestock sectors there are many data points involved in the recognition of an animal to ensure identity, origin and to be able to trace the individual's production and health history accurately. In Europe, livestock breeders and operators in the livestock sector have a key role to actively participating in the protection of both animal heritage and human health. The main advantages of the combination of new technologies, user-friendly tools together with traditional information systems are:

We would like to thank Allevamento Martin, Allevamento Hombre, Il Pascolo e Allevamento Costantini for providing access to their farms during the dataset acquisition.